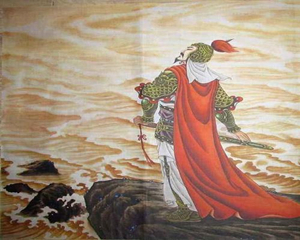 Yu meiren: On the Original Theme

And blew down the border city moon.

Eight thousand sons and brothers had long been the dragon's men; （1）

In a single night their finely worked saddles and golden armor were scattered on endless empty wastes.

She chose to be jade crushed at the side of the king; （2）

Faithful, her spirit refused to enter the land within the passes; （3）

Year after year, when Wu River waves rise in spring, they are red with her tears. （4）

（1）. The expression here, literally "followed the dragon," describes those supporting the attempt of a leader to establish dynastic legitimacy. The phrase is borrowed from the Book of Changes: "Clouds follow the dragon; winds follow the tiger."

（2）. From a saying, "Better to be crushed jade than an unbroken tile." Lady Yu chooses a noble death rather than debasement and life.

（3）. The "land within the passes" was the territory of the Zhou feudal state of Qin and the base of Qin dynastic power, conquered by Liu Bang after Xiang Yu's death.

（4）. Facing defeat at Gaixia, Xiang Yu was offered a route of escape back across the Yangzi to Wu by a village headman with a boat. Xiang Yu refused, saying he would not be able to face the families of the husbands and sons he had led to their deaths. The Wu River flows into the Yangzi. Fallen red petals floating on the river in spring are figured as tears of bloodshed by the grieving spirit of Lady Yu.